Friday Library Trip: From Boat to Beach and Back Again

It’s been a while since I’ve done one of these posts. We’ve read a ton of books in the interim, (and actually we go to the library on Thursdays now, but oh well). Here are a few favorites:

The toddler chose this one because there are rubber ducks inside, but she continued to love this book because of all the fun rhymes and colorful illustrations. 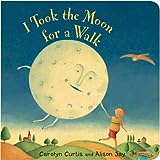 I Took the Moon for a Walk by Carolyn Curtis, illustrated by Alison Jay

The toddler has learned to say both “moon” and “walk” and thus this book was a natural choice. She loved the illustrations and whenever it was time to read she would say, “Moon, moon!” and point to this book. 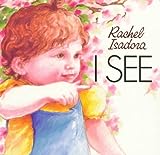 I See (Board Book) by Rachel Isadora

To be honest, I wasn’t immediately drawn to the illustrations of this book, but the text is so wonderfully simple, describing the things a toddler might see over the course of a day.  My daughter absolutely loved this one. She got a kick out of identify the objects and animals she recognized. 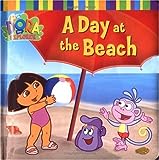 A Day at the Beach by Lauryn Silverhardt, illustrated by Jason Fruchter

Sigh. My daughter has only seen one or two episodes of Dora, but as soon as she saw this book at the library, she wouldn’t put it down. I had trouble getting her to relinquish it so we could check it out. The book itself is fine, with simple text and some colorful beach objects to identify, I just wish it wasn’t a book based on a TV show. But I guess I should just be happy that my daughter loves books so much.