How to Watch TV Like a Novelist Part Three: Details, details 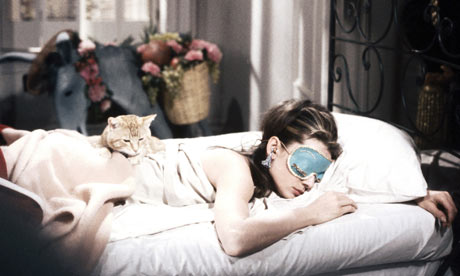 We’ve talked about characters and plot. Now for the final part of this series: details. When trying to make a scene more realistic, directors rely on props and costumes. The right details can totally make a scene. Whenever I get those little sleep masks on an airplane, I can’t help but think about Audrey Hepburn’s sleep mask with the fake eyelashes in the movie Breakfast At Tiffany’s. (I totally want one of those). The sleep mask adds a sense of glamour to the scene, and yet also says something about her lifestyle–she regularly sleeps during the day because she spends all night partying. Hence, the sleep mask.

Here’s a little writing exercise for you: Take a look at the picture above and try and describe it to yourself. Once you’ve described it scene, go back and figure out which details matter and really say something about the character and which ones don’t. For example, Holly Golightly’s nameless cat lounges on her back as she sleeps = important. Holly’s pillowcase is white = not important (though maybe it would be if it were smeared with last night’s makeup). Also pay attention to what sounds they’ve decided are important to include with the scene. I’m too lazy to actually watch the movie again and find this scene, but since this is daytime in NYC, it might be realistic to add cars honking, maybe the cat’s meows as he/she begs for food.

One limitation–television is only a visual/auditory medium (though I’m still waiting for smell-o-vision for watching Top Chef). When describing a scene, it’s important to involve your other senses as well. What smells/tastes/feelings (as in sense of touch) would help the scene come further alive? Try brainstorming:

Smells: Holly is probably wearing an expensive perfume, and since she’s been partying also probably reeks of cigarette smoke and alcohol.

Feelings: Are the sheets rough, cheap sheets? Or has Holly splurged on high thread-count sheets?

Try this writing exercise on your favorite TV show (or, horror of horrors, maybe try this exercise on a real life scene).

One Response to How to Watch TV Like a Novelist Part Three: Details, details