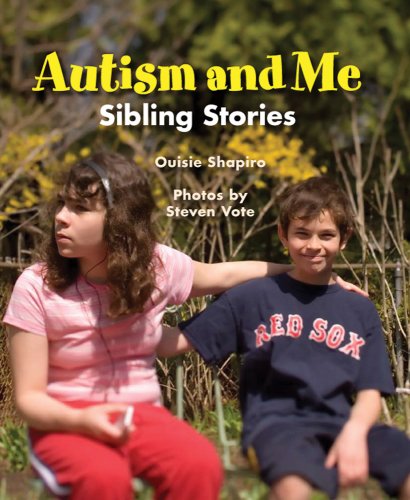 Autism and Me: Sibling Stories by Ouisie Shapiro is a book of testimonials from children about what it’s like to have a sibling with autism. The stories are accompanied by large photographs of the siblings playing together, smiling, reading, hugging, etc.

Honest and touching, the stories are each unique and yet completely relatable. One boy named Troy admits that his brother Sam, “bugs [him] a lot of the time” and then goes on to say that he doesn’t let his brother into his room because Sam “likes to rip things”. He also says that he “wishes Sam could talk more” and ends by saying, “I think having autism is like being in a dark room and the light never turns on. I did that once. I turned out the light and pretended I couldn’t turn it back on. It was really scary.”

But it’s not all sad, some of the testimonials are cute and funny. One girl named Amy, says, “It would be good if Jack could talk, but I really wish that he could run as fast as me and have good handwriting like me.” HA!

At times, however, the testimonials feel a little strange. Because they weren’t directly written by the kids, but were rather culled from interviews by Shapiro with the children (and then written in first-person), every story reads as though the same child wrote each one. And because of that, it is difficult to get a sense of how old the children are, especially since their ages aren’t listed in the text (yes, they have photos, but it isn’t always easy to tell how old they are).

At last year’s NESCBWI meeting, I heard a speech by Cynthia Lord about her book, Rules (about a girl who has an autistic brother). Lord said that she received numerous letters from kids thanking her for writing the book, including one letter from a girl who felt that the main character  was “just like her” and that she loved Rules so much that she slept with it under her pillow. Because this book is a series of short testimonials with kids of varying ages and siblings with wide differences in the severity of their autism, I don’t think it will elicit such a strong emotional attachment from kid readers. But every kid wants to be reassured that they aren’t alone in their struggles, and this book definitely accomplishes that.

Who should buy this book: Parents with a middle reader who wants to read books about kids with autistic siblings.

This book is not for: Older kids who would want something more substantial. Also not sure that kids who don’t have autistic siblings would appreciate it.

One Response to Kid’s Medical Book review: Autism and Me: Sibling Stories by Ouisie Shapiro