There are only two more blog entry left about my India trip (that happened way back in January!). What in the world am I going to blog about after I’m done? I guess I’ll have to go somewhere else interesting. Or take lots of lovely pictures of Somerville (aka Slumerville). :)

Anyway, we stayed for several days in Chennai. We were there during Pongal (the rice harvest festival), so we went to a relative’s house to see how they celebrate the holiday.

Our next stop was Thanjavur, and we stopped along the way there to see the temple at Chidambaram. This temple is one of the five sacred Shiva temples that each house a Lingam (a holy black rock that represents Shiva) that is associated with one the five elements (water, earth, fire, wind/air, and sky/”ether”). The Chidambaram temple has the lingam that represents “ether”. Unfortunately, you aren’t allowed to take photos inside the temple, but here is one taken from the outside gate. 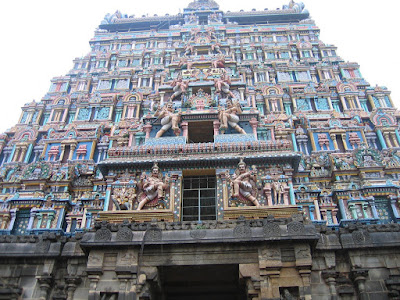 We then drove to Thanjavur to see the temple there. The Thanjavur temple has many names: Periyar Koil (big temple), Brihadishwara Koil, Rajarajeswaram, and several more. It was built by Rajaraja Chola I in the 11th century though it was added to by subsequent kings. 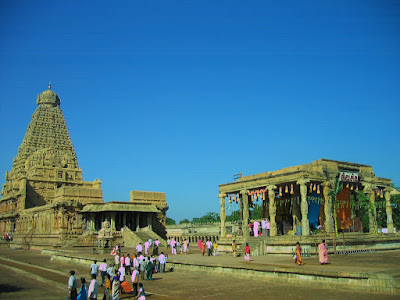 Each Hindu god has an animal associated with him. Nandi the bull is associated with Shiva so this temple had many statues of bulls. Inside the structure on the right (in the above photo) was a gigantic granite bull decorated with fruit and vegetable garlands for pongal. Notice also the elaborate painting on the ceiling. 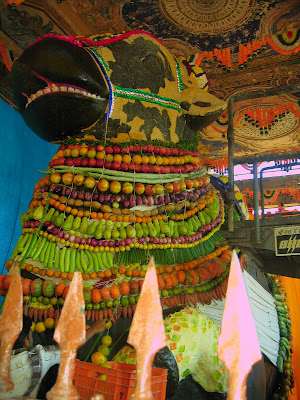 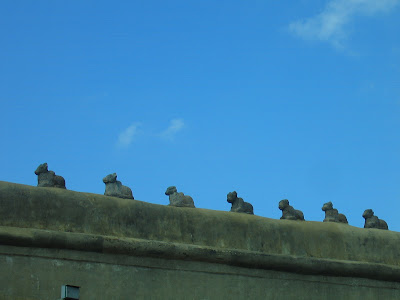 Below is shows some of the writing on the steps of the temple. There was a lot of writing on the wall as well. Much of what they know about 11th century South India is from these writings. 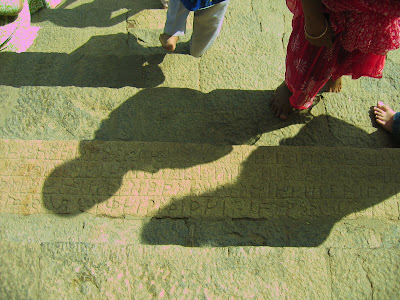 Later that day we went to a palace from the 17th century that was being restored. Here is a closeup of one of the entryways. 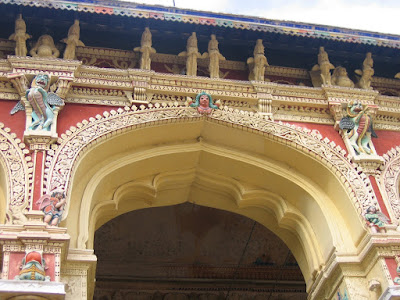