Next stop Agra! We drove through heavy traffic to get to Agra, which meant unfortunately that we didn’t get there in time to see everything we wanted to. But at least we had time to see the Taj Mahal which was breathtakingly gorgeous. We got there around time for sunset and hoped to see it glow in the sunlight, but it was too foggy. :( oh well. (For those of you who don’t know, the Taj is said to appear different colors during sunrise and sunset and is supposed to really glow in the moonlight).

Agra itself isn’t that nice of a city, but I do have to say it was better in terms of pollution since the last time I was there. Apparently they banned all industry from Agra and have also banned most cars from getting within a certain radius of the Taj. Last time I was there, the Taj was a little yellowish and the pools around it had some trash inside, but this time it was all cleaned up and the annoying street vendors who very forcefully tried to sell us leather horse whips last time (yes a horse whip) were nowhere to be found.

I also enjoyed having a guide who showed us lots of details up close and the many optical illusions that were built into the Taj.

Here is a photo. 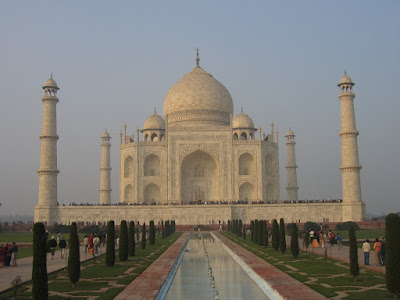 Like I said, it was kind of dark and foggy. Also, I had to be careful no to choose a photo with me in it, because I look pretty bedraggled after our long car trip.